Behind the Counter | Ep.2

The kibanda, a booming bite of Kenyan culture. The story of Stephen’s Hotel.

Growing up as a child in the early 80s in Kakamega, western Kenya, and being able to eat mandazis and a hot tea at 7 am would have been a dream for many like Stephen. “My family was very poor, in fact getting a daily meal was an adventure. I remember the feeling of going to bed without even a glass of water to drink and also recall the thrill of finding something to eat, something that would fill my belly while I was out roaming the streets. After that, all you could think about was going back home and sleeping.”

“Likewise”, he continues, “I also have nice memories from my childhood. I loved playing football with my schoolmates, and I was quite good at it. I played as a midfielder or winger, and if I didn’t go to school one day, they would come and pick me up from home. Thanks to this, I went to school more than I could have because my parents often couldn’t even afford the fees.”

Eventually, in his early twenties, Stephen –the protagonist of the second episode of our Behind the counter series– left his home in the countryside and moved to Nairobi to become the owner of Stephen’s Hotel, Kenya’s second best-performing kibanda out of a total of 445 present at Glovo today in the country. Today we’ll learn about his story, discover the importance of the kibanda in Kenyan culture, and analyse the local impact of being a pioneer in the community.

How did you end up opening Stephen’s Hotel?

“When I arrived in Nairobi I stayed with a cousin and I did a bit of everything. One of my first jobs was washing cars, which allowed me to save money to get my driver’s license. At that time, all I wanted was to buy a car and work as a driver. After that, I travelled around Nairobi, working at different restaurants where I learned many of the skills I have today, and I soon realised that, in my early twenties and without education, it would be very difficult to find a job with good conditions. So, I set up my first business, a kiosk, where I sold mandazis, sweets, and cigarettes. Later on, in 2020, I set up a small business which, with a lot of dedication, has become what today is: Stephen’s Hotel. 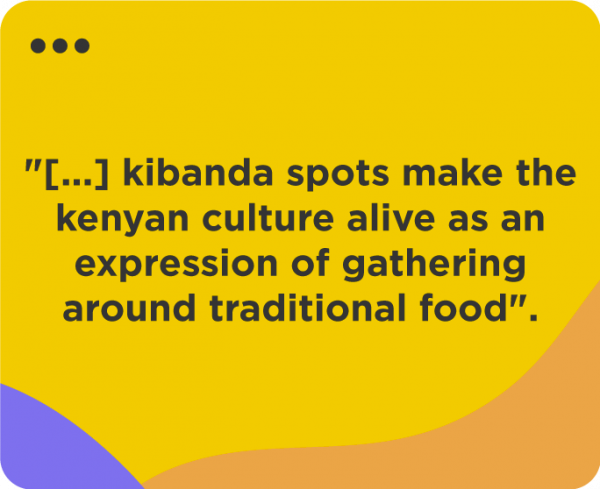 I opened the business with my wife although soon after she moved back to the countryside to take over the family farm. At the beginning, things moved very slowly, I had to be very patient. I started serving only one recipe, githeri, and little by little, I added other recipes to the menu such as ugali or chapati. It all happened in an organic way, people started to visit and enjoy the food, also engaging with us and eventually, they started  coming back for more.

I combine my work at the kibanda with the family farm in the countryside. I still go there twice a month and take advantage of the opportunity to bring in seasonal produce that I use in my recipes; other times, it’s even easier, I just hire a transport company and in one day I have it at my restaurant. Although we sell most of the harvest, I am confident that using my own produce and dedication to the preparation of the dishes help me to provide a better service to my customers. 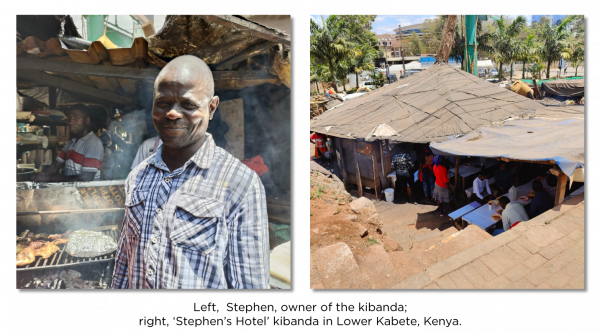 Why Stephen’s Hotel? There are no rooms here.

“I chose this name for my Kibanda for two reasons. On the one hand, I added my name ‘Stephen’ so that anyone coming from the countryside where I grew up would easily relate it to me” –with a chuckle he confesses that he is someone quite well known there. “But mostly to make them feel at home, in my home.”

As for why he added the word ‘hotel’, “well, as you can see, there are no rooms around here, and in Kenya it’s quite common to use the term hotel to refer to big, well-functioning restaurants. And that is what I hope to do with my Kibanda, because although we started from the very bottom, my goal is to turn Stephen’s Hotel into a great restaurant.”

Why is the kibanda concept so deeply rooted in Kenyan culture?

“The Kibanda concept was born in Kenya as an affordable solution for the daily life of the lower and (a portion of) the middle classes. They were located in places where these underprivileged classes lived, offering traditional dishes or foods like fruits or vegetables through a very personalized service.

From here, they have been evolving and now their consumption has become much more widespread. They are even found in urban commercial areas, offering affordable dining to workers, tourists, students looking to save money, and people from different classes looking for a tasty bite to eat. “Stephen’s Hotel is located in Lower Kabete, specifically at a busy intersection halfway between Kenya county and Kiambu county. The area is called ‘Lower Kabete furniture’, as it is known for its local craftsmen and it is close to both the Sarit Centre and the Westgate mall.”

The term kibanda is a Swahili word meaning ‘hut’ –a small or crude single-room building based on semi-permanent structures of all sizes– therefore the concept would be something in between a street food stand and a brick & mortar restaurant. “Our space is a large, open concept like the rest, and while on one side you have the set of tables and benches for eating, on the other is the open-space kitchen so customers can see how the dishes are cooked and served. For us, kibanda spots make the Kenyan culture alive as an expression of gathering around traditional food”. 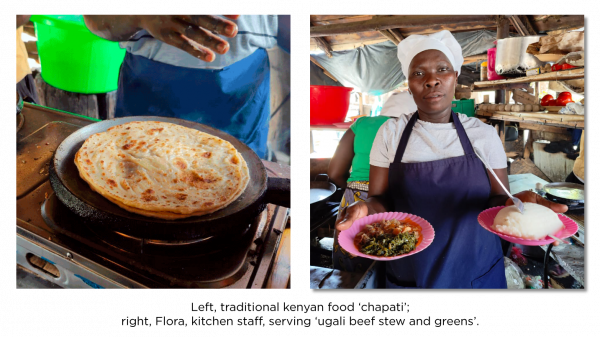 “We are open Monday through Saturday and my day always starts at 4 am. I wake up and after 30 minutes of getting ready, I leave for the kibanda. By 5 am, I am there and together with the rest of the employees, we start working. Right now, I count on 15 employees including a supervisor, a cook, people in charge of food supply, etc. Without them it would be impossible to run the business.

Breakfast runs from 7 am to 10 am, so by 6-6.30 am we have the most popular products such as tea, mandazis and chapati ready. From 10 am, we start preparing lunch, which starts at 12.30, and goes on until 3pm.  We serve dishes such as ugali, rice, meat, green leafy vegetable, beans, and  nyama choma –the latter of which consists of grilled meat and is so popular that it is usually the first thing to be finished and we have to take it off the Glovo menu.

Finally, from 4 -5.30 pm, people like to enjoy a tea and after half an hour of cleaning the place up, at 6.00pm we close. In the evenings, I take care of the finances at home”.

How has Stephen’s Hotel contributed to the local community?

“Do you know that I opened the first kibanda in the area? When I opened Stephen’s Hotel it was just me and in a matter of 2 years we are now about 10 kibandas and many other shops that have wanted to take advantage of the traffic that is generated to sell other products. This happens when people see that others are successful, so they have the desire to try something similar.

And I’m happy, because competition is always welcome, especially because this way we bring more dining options to the customer and even increase job opportunities –if someone comes looking for a vacancy and I don’t have it, I can always refer that person to another kibanda in the area.

Talking to my clients I have heard that, before I came, some of them were hungry and others had to bring their food from home and eat it cold. Now they can enjoy a hot and fresh meal and engage with us, something we also strive to make them feel good about. I am happy to have been the first to push for the growth of kibandas in the community, as we are part of the country’s reality.

In large part, we are achieving this growth because of the opportunity we, as a kibanda, now have by working with delivery apps, being able to extend our business digitally. Before, I didn’t know I could use the internet for this and now around 30% of my income comes from Glovo.” 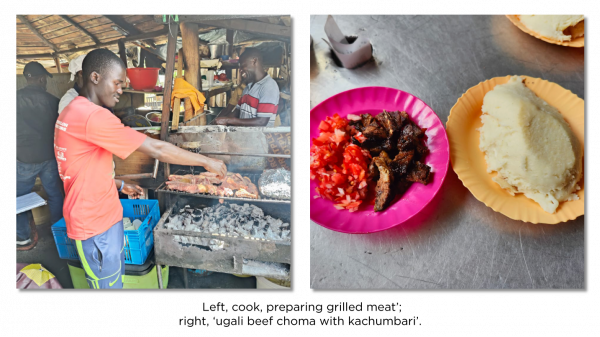 Stephen’s story has brought us a little closer to the local realities experienced at Glovo. We’ve discovered that the kibanda is an intrinsic element of Kenyan culture, proud to be seen and represented but above all, it’s a business model that thinks ahead and recognizes delivery as a great opportunity for growth.

In future episodes, we will continue to explore neighborhood icons and their impact on local communities. Stay tuned for more.

For the first episode of Behind the Counter, we spoke with David, co-founder of Ibiza Poke. A story of entrepreneurship that started in Dubai and landed in Ibiza. Learn how sustainability and adapting to the local landscape turned this local startup into a community icon.

On the occasion of International Sushi Day, celebrated every year on 18 June, we took a closer look at the stories of some of the Glovo partners who delivered the first sushi orders through our Glovo app.