Building around the local essence. The story of Ibiza Poke.

It’s a Saturday morning in September –still high season in Ibiza– and, judging by the flustered and busied movements from behind the glass counter, it looks like the staff at Ibiza Poke are gearing up for a busy weekend. It’s only a quarter to 12 and the shutter is still halfway down, but someone with an Italian accent manages to break their way in search of Ponzu sauce. 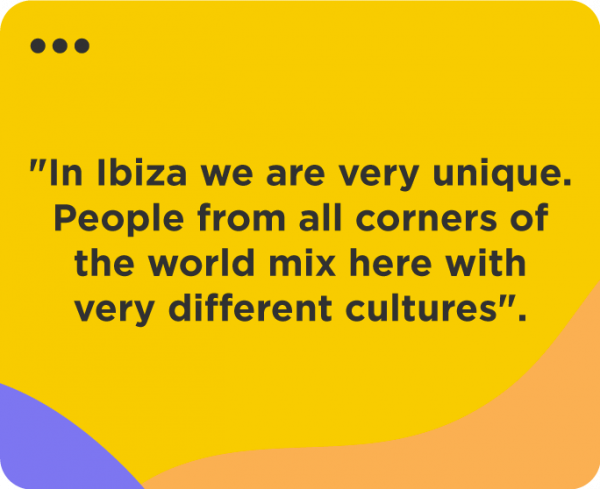 David, the co-founder of Ibiza Poke, is in love with this land. He has dark hair, big eyes, and two charming dimples that appear when he smiles. In his thirties, he has already been on the “White Island” for 12 years and knows that, in order to stay, the key to success is to embrace contrasts through a local lens because Ibiza has a rhythm all of its own.

Upon stepping foot in Ibiza Poke, it smells of summer, the sea, and all those fresh ingredients received daily. Just a few hours ago, 30kg of salmon were unloaded and went straight to the small kitchen right behind the register to be diced. The blue mosaic tiles at the entry entice and welcome passersby before giving way to clean white walls and rustic materials such as wicker lamps, wooden furniture, and raffia cushions with boho motifs. A place connected to nature and the very essence of the island itself, standing tall with sustainability at its core through the use of bio & eco packaging and cutlery, among other initiatives.

On this first visit, we’ve chosen a rice-based poke with tuna and avocado, topping it off with colourful beetroot and crunchy bean sprouts. We’ve also added –on the house recommendation– their famous teriyaki and soy sauce. While we wait, the team finishes getting everything ready. David sits down with us next to a shelf full of Lonely Planet guidebooks –this space definitely pushes you to travel. And that is how the first instalment of the “Behind the counter” series begins, an up-close look at those neighbourhood icons that personify their community through local culture –lucky for us, they also happen to be  Glovo partners.

How did the idea of opening Ibiza Poke come about?

“I was in Dubai in 2017, visiting a friend who would later become my partner in Ibiza Poke. There, in a big middle-class hotel, day after day, we saw how a small place kept welcoming people, and yet there was always a queue to enter! It caught our attention so much that we decided to go, and that’s how we discovered poke.

What we liked most was that it was cheap, quick to prepare and extremely customisable. It was also a perfect choice for Ibiza, a summer destination with good weather and where people like to take care of their bodies. Something light and easily transportable went 100% with the island’s lifestyle, we just had to westernise it.”

“We came back from Dubai and the idea remained for small gatherings with friends until, one day, having breakfast in an iconic café on Carrer del Metge Antoni Serra, it became clear to me. There was a space for rent right across the street, and the location could not be better: between Avinguda d’Ignasi Wallis and Carrer de Madrid, two commercial arteries of the city.

We have lived in Ibiza for many years and we know that life happens outside the city, between coves and surrounded by nature, so, if you want your business to work, the location is key. This way, you make sure that when people come to do their shopping or enjoy some leisure time, they will discover you. 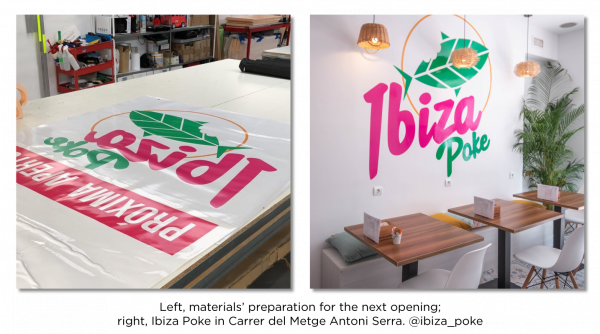 We finally opened Ibiza Poke in 2018 and, since then, we’ve faced many challenges. In our early days, the popularity of poke came along with the interest of big brands to franchise and open in Ibiza. Everyone wants to be here, as an iconic destination for their portfolio, so we had to make a name for ourselves. As soon as we stabilised, we opened more locations on different parts of the island. First, a production kitchen exclusively for delivery and take away, thinking of the increasing demand we would have to cover during that summer and, after its success, we continued with 2 more venues in Santa Eulalia and San Antonio, the last one in the north. This, together with the idea of including Ibiza in our name to reinforce our local nature, made us grow and be the ones who put down solid roots here.

More recently, due to COVID, my two partners and I had to close the last two locations opened while we maintained the original one and the delivery centre as this is a core business element at Ibiza Poke.”

Changing his gaze, David enthusiastically tells us that their plans for 2023 are to reopen more stores, namely 2 in Platja d’en Bossa y San Antonio. In 2022 alone, Ibiza Poke has experienced a 96% growth in orders compared to 2021 on Glovo.

How have you driven positive change within your community?

“We were the first poke place that opened in the neighbourhood of S’Hort del Bisbe, one of the city’s most central. When we arrived in 2018, there was just one coffee shop and the rest were drugstores and a bookstore. However, after our opening, other restaurants were encouraged and now the whole street is full of terraces for eating and drinking. We are proud to think that we were the click that made this street what it is today”. Ibiza Poke was also the first restaurant dedicated to poke in Ibiza to join Glovo in 2019. Since then, the number of partners offering this dish on the island has increased by 50%.

“As for the product, up until we opened, there was no poke option nearby. Now the community here can enjoy this fast, healthy, and affordable option without leaving the neighbourhood”. 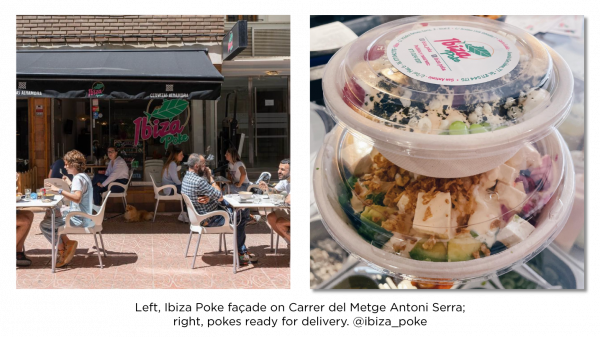 Tell us about Ibiza Poke’s customers

“It’s funny because, over the years, we’ve seen not only the neighbourhood evolve, but also our customers. When we opened, the first ones to come were young people aged 14 to 17 who, through social media, found out about this new Hawaiian trendy dish loved by influencers because of the colourful ingredients. At the same time, it caught the attention of the elderly, men and women in their 70s who, on the recommendation of their doctors to follow a healthier diet, found an opportunity here.

Even still, after all these years and after the initial poke fever passed, we now have all types of customers. We are open all year round and, from Monday to Friday, office workers with half an hour for lunch come to enjoy a quick and healthy option. In summer there is a bit of everything, as Ibiza becomes more crowded. On the weekends is where we notice the biggest peaks in delivery, especially on Sundays from 12 to 2 pm when people take it to the beach, on getaways, etc.”. According to Glovo data, global Poke consumption during 2021 grew by 130% and, in the last 12 months, May was the period with the highest demand while Fridays at 1 pm and 8 pm are, on average, the poke-crazy hours.

Any kitchen secrets you want to share? What about poke trends?

“There are two rules that we follow to the letter at Ibiza Poke. First, there is the fact that all of our ingredients are fresh, something that is quite noticeable in the quality of fish which we receive daily at  our venues. Second, the rice, which rests for 24 hours before being served. Unlike other places where the rice is boiled and cooled, in our case the process starts much earlier with the washing to remove the starch, then it is boiled and finally, we add our sushi dressing and leave it to rest until the next day”.

Between laughs, David recalls his first experience with Poke in Dubai where all available options were spicy. “We arrived in Ibiza with the challenge of needing to adapt a dish that we thought was originally spicy. Fortunately, after some research, we realised that spiciness had actually been one of the keys to the local adaptation of poke in the Emirate and, therefore, we would have to find our own formula. Today, we have 14 sauces, spicy and non-spicy, and we have incorporated Mediterranean options such as pesto sauce or grated cheese as a topping.” In the last 12 months, a user has ordered from Ibiza Poke 49 times. Hooray for successfully adapting to local tastes!. 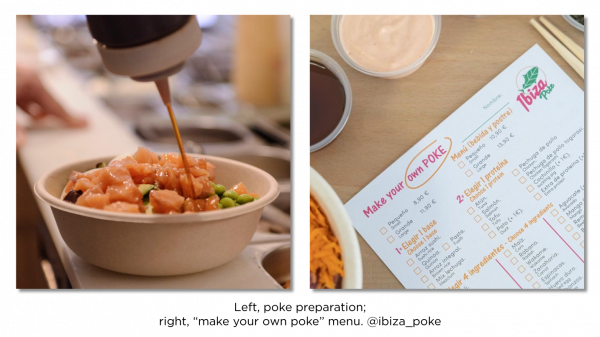 The full customisation offered by poke is another of the keys to success. Here, you can see the difference in local tastes, where the mix of rice, chicken, avocado, and cherry tomatoes is the trend; while the more international diners go for ginger, bamboo, beetroot, jalapeños, bean sprouts or ponzu sauce”.

Speaking of countries and looking at Glovo’s international Poke consumption, Spain and Italy account for more than 90% of global consumption, followed by countries such as Serbia and Romania where, in the last year, this Hawaiian dish has grown by 325% and 103% respectively.

What does sustainability mean to you?

“In Ibiza everyone is very aware that we live in a paradise that we must take care of, and you get this message as soon as you set foot on the island. Issues such as the protection of the seabed and Posidonia or the cleaning of beaches are the focus of great activism on the part of individuals and companies.

In the beginning, when we sometimes ran out of clean cutlery and brought out the typical white plastic forks, customers were quite surprised. Now, we use environmentally friendly and biodegradable packaging made from sugar cane and recycled plastic, as well as certified organic bamboo cutlery, which we buy from the Glovo Store”; an e-commerce platform that Glovo makes available to its partners to be able to purchase, among many services, products such as packaging with sustainable features. “In addition, our products for the cleaning and maintenance of our locations are purchased through a local company, La Alternativa Eco, which produces environmentally friendly and non-polluting alternatives to support the marine environment. 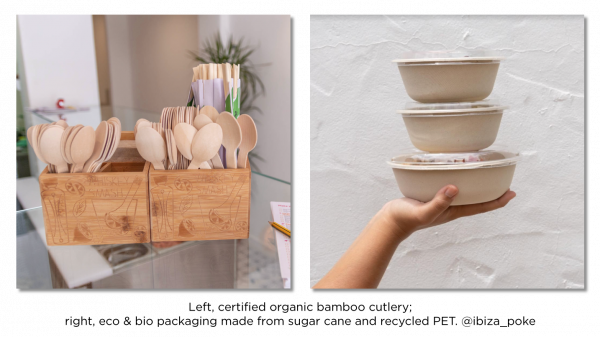 We also try to do our bit in initiatives such as beach clean-ups, where we donate drinks for volunteers, or by collaborating with organisations like Ibiza Preservation Foundation, with whom we’ve participated in projects where our customers can donate part of their payment to various causes such as the preservation of Ibiza’s seabed.”

We’re bidding farewell to September and Ibiza Poke by celebrating International Poke Day on September 28th. Keep your eyes peeled because, in the coming months, we’ll continue to explore neighbourhood icons and their impact on local communities.

Delivered 2022 is officially out! Our favourite data-fueled report of the year, Delivered is your chance to discover the most interesting data from the past year, dissect trends and key learnings, and put it all into practice for the year to come.