Kamila Purymska launched Coding Giants in Spain in 2021, a school with an innovative spirit behind it. Supported by a group of educators with extensive competencies and experience, they work to provide coding classes to children and youth aged 6 to 18.

Since 2021, Glovo and Coding Giants have joined forces to help give young girls a start in STEM careers. Together with the Glovo and our ‘Women in Tech’ program, we’ve been working to reduce the gender gap in jobs in the field of technology, empowering more women so that a greater number of them end up starting a career in the tech sector.

To achieve this, we need to focus on generating interest in IT, combating gender stereotyping in society, and educating. For this we have prepared several actions: talks in institutes in which Glovo team workers will inspire adolescents to choose technological careers, visits to the Glovo offices in Madrid and Barcelona for institutes and summer boot camps that can influence adolescents to pursue IT careers in the near future. We’ve also hosted young girls  at our office in Barcelona to have them shadow our women in tech for a few days for a unique hands-on experience. 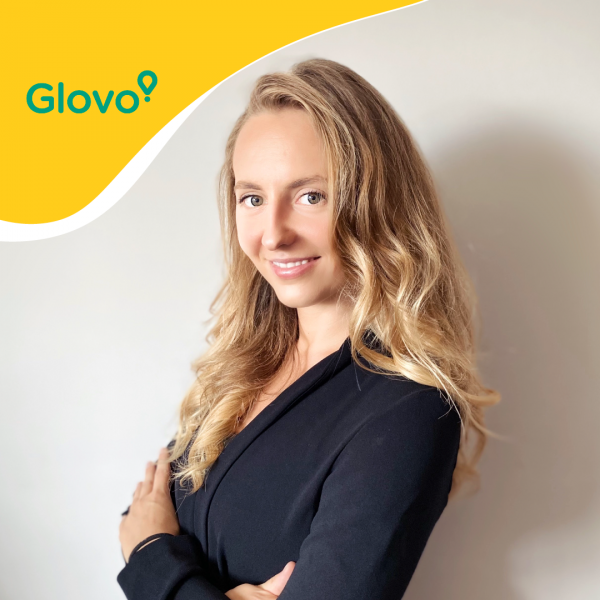 Can you give us a little bit of background on yourself?

I am an Industrial Engineer, graduated from the Warsaw University of Technology and the The School of Industrial Engineering of Barcelona (ETSEIB) at the Universitat Politècnica de Catalunya (UPC). I have also obtained several certificates such as Sound Reinforcement Simulation Tools at the Universidad Politécnica de Madrid or Value Proposal Design for Startups at Sustainable Energy at the Instituto Superior Técnico. Later on, I completed the Web Development Bootcamp at Ironhack as a FullStack Developer.

Were you always interested in following a career in tech?

Not always! As a young girl, I wanted to become a singer!😅

My entire childhood was focused on sports. I trained in basketball until I was 18, when I realized this is not the path I want to follow. Instead of continuing my career in a sports school, I started my secondary education in a class with a mathematical profile, which later on gave me an opportunity to graduate from the Warsaw University of Technology.

My first experience was the position of a frontend developer at one of the fintechs here in Spain. Even though my team was all male, I felt really comfortable. They were always very open and helpful throughout my whole journey. It was the perfect place for my first steps, I got a lot of support and knowledge from my teammates. I think a very important aspect, especially at your first job, is the feeling that you can ask any question without fear and that was my experience. It was the time when I learned the most, also from a linguistic aspect! When I started working there, my Spanish was at a very average level. I learned a lot in a very short time, including those important phrases that they don’t teach in language schools! 😅

Did you ever experience any negativity in the workplace as a woman in tech?

Never! I have really good memories of my tech career and never experienced any unpleasantness. Such situations took place during my academic years, due to the fact that the university was dominated by male, senior professors with different beliefs, but I think it is also changing.

What advice would you give women interested in starting or moving their careers to tech?

There are many areas in the world of technology, so I would say the most important thing is to know what interests you most and what you want to focus on.

I would recommend attending workshops, meetings, and networking events related to technology which is also a very good opportunity to meet people and create a network. I would highly recommend actively participating in these events by connecting and  asking questions to people who work in the world of technology on a daily basis. This is a great way to clear your doubts and get to know the real side of the sector.

When choosing your first job, I would advise you to meet the team members or their representative during the recruitment process,  if possible. This aspect convinced me to choose my first job and I know it was a key aspect in my further development.

As for any concerns about working in a male-dominated sector, I’d say it’s nothing to worry about in advance. Just remember that you have the same rights and skills, always manifest your problems and needs and use your strengths to gain confidence in the team.

Who are your female role models?

My female role model has changed over the years. It was related to different stages in my life, during which different aspects played a key role.

In the early stages of my career as a developer, I followed a lot of fantastic women front end developers that I discovered online. I admired their skills and knowledge as well as their positions in top companies like Google.

Later on, I was greatly inspired by women in leadership positions, such as Susan Wojcicki (who also has Polish roots), or Sheryl Sandberg, who also wrote an important book called: “Lean In: Women, Work, and the Will to Lead”.

Recently, I have been really inspired by women who have created their business from scratch and are actively involved in it. I love talking to them, exchanging experiences, problems, processes and stories from every stage of the business development.

I was surrounded by women who were very inspiring and only years later did I discover how extraordinary and important their roles were. My great grandmother was the driver of many important changes in her village and community, but also for the whole family. My grandmother started her own business in the early 1980s, struggling with many adversities as a woman, mother and entrepreneur.. But the female role models for me are also mothers who have devoted themselves to the family for many years. We should not forget about it, very often it is thanks to them that we now have a chance for development and success in our professional life.

What inspired you to start Coding Giants?

Four friends started the Coding Giants project in 2015 and it quickly turned out to be a great success. After 7 years our programming courses are available in Poland, Spain, Chile, Mexico, Bosnia and Herzegovina, Croatia, Singapore, Germany, Australia, Montenegro, Slovakia, Slovenia, Czech Republic and in the near future we are planning expansion in the USA and Great Britain.

Children are very interested in learning programming and their parents are aware and willing to invest in such skills for their children. High IT competences have been, are, and will be in demand on the labour market, also outside the broadly understood IT sector. However, the demands of modern technologies that spread in every aspect of our lives go far beyond the traditional understanding of IT skills. Computer skills are no longer an advantage, but a required standard.

As for me, this project has always been very interesting and innovative and as a developer, I saw a great potential in it. It was definitely something that was missing on the market and the interest of children and parents grew year by year.

But for me as a woman, one of the most important factors was the desire to make a change in this field. Together with Coding Giants, but also with #AlianzaSTEAM, ‘Niñas en pie de ciencia’  (Girls for science) and the Glovo project “Women in Tech”, I really hope we can achieve it on a much larger scale.

My goal is for girls to make up 50% of the students at our school in a few years time. There is a lot of work to be done in this area and I hope that, together with Glovo, the Ministry of Education and other entities, we will be able to change it in the near future.

Could you share a little bit about your partnership with Glovo and the goal to give 500 teenagers in Poland and Spain the opportunity to take coding classes for free? How does this initiative empower young women?

This is a really great project that for me personally, was very important. 500 girls had the opportunity to learn the basics of programming with our best teachers, learn about web development, create games in Unity, get to know the basics of artificial intelligence and the basics of databases.

Together with Glovo, we want to reduce the gender gap in the field of technology, empowering more women so that a greater number of them end up choosing a career in the technology sector. To achieve it, we need to focus on generating interest in IT, combating gender stereotypes in society, and education. We have prepared several actions and one of them is a programming bootcamp that can influence young women to pursue careers in the IT industry in the near future.

These boot camps consist of 5, 90 minutes classes and are completely free. The courses are held online by our best teachers, with recorded sessions to consult after each lesson and with reinforcement learning materials attached.

Upon analysis, we noticed that the number of girls among our students increased by 6%! We also know that many of them chose technology-related extracurricular activities in their schools. We also noticed that many other institutions and companies are interested in the project and want to participate in this great initiative. I hope we will be able to continue the project for the next few years and achieve the goal of breaking stereotypes and inspiring more girls to choose a career in the technology sector.

ConsumerSocial Impact
Behind the Counter | Ep.2

For the first episode of Behind the Counter, we spoke with David, co-founder of Ibiza Poke. A story of entrepreneurship that started in Dubai and landed in Ibiza. Learn how sustainability and adapting to the local landscape turned this local startup into a community icon.

On the occasion of International Sushi Day, celebrated every year on 18 June, we took a closer look at the stories of some of the Glovo partners who delivered the first sushi orders through our Glovo app.