“What we are capable of” – stories from Ukraine

For most of us, war is something we’d struggle to imagine, let alone experience.

But in February, that changed for the people of Ukraine. For the residents of Kyiv, Mykolaiv, Lviv, and many more cities across the country, their lives were upturned forever with the rocket fire of Russian forces.

While it is estimated that over six million Ukrainian residents have left Ukraine for neighbouring countries so far, there are eight million who remain, despite being forced from their homes.

In a country so bombarded by conflict, it is hard to imagine life continuing. Yet it does – and in Ukraine, it has. Not just for those fighting on the front line or providing medical care and other integral support, but for those in everyday roles as well.

As the company behind the vital CookRooms and courier services operating in Ukraine, Glovo spoke to those who are still there; whose lives have been greatly upset by the conflict. Those who see their Ukraine undoubtedly as a changed one – but one they still call home.

Sergey Shakhrai once enjoyed the tranquillity of his home city, Mykolaiv.

“Before I started my deliveries, I had coffee every day with my courier friends in the city,” he says.

He would stroll through the city’s parks, go to the movies, and enjoy a barbeque with friends. On weekends, he’d travel to nearby regions like Odessa and enjoy the beautiful views from the coast.

Kyiv resident and courier Yurii Huzenko is someone who also fondly remembers how day-to-day life used to be. A shopping mall, ‘Respublika Park’, had just opened in the city centre near his home and for Yurii it was another place where he could start conversations with the city’s residents.

It was the energy of the city Yurii loved – the restaurants and the coffee shops that made Kyiv such a wonderful place to live and work.

Among those businesses was Asian food restaurant Kitaika whose owner Anna opened its doors back in 2020.

“Our clientele started out as the urban hipster,” she explains, “but it quickly expanded and all kinds of people came who simply wanted to try something special.” 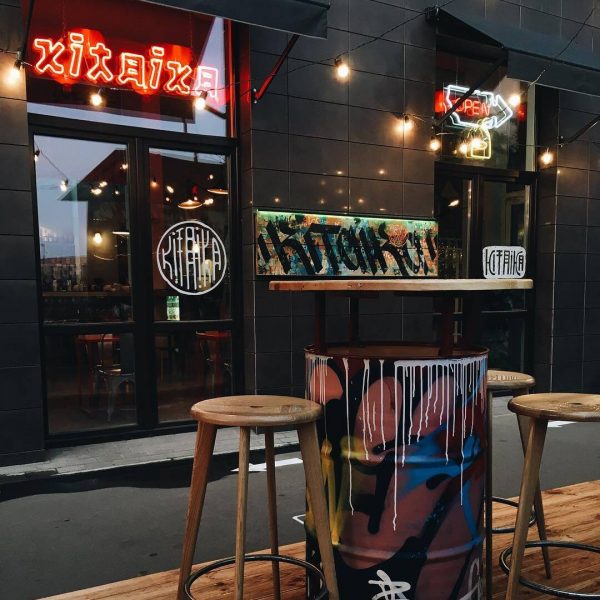 Oleksii is another business owner whose chain, Sushi Ushi, has locations in Dnipro, Kyiv, and Kryvyi Rih.

He told us: “The people who came to Sushi Ushi were people who wanted to try something new, especially at times of celebration. I wanted to create a space that offered tastes people would find unusual.” 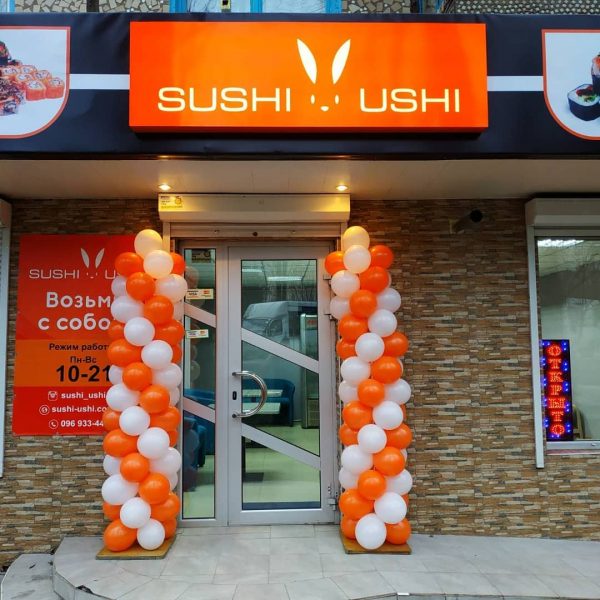 Away from the modern shopping malls Yurii liked to visit and the fancy establishments run by Anna and Oleksii, is the beautiful, historic neighbourhood of Podil. Home to the oldest university in Europe and surrounded by cosy coffee shops and bars, it’s where courier Serhij Siedykh lived before the war.

For Serhij, like so many other Ukrainian residents, the future was open and undefined. With little expectation of the scale of what was about to come.

When the war began

The war started in the early morning of February 24th and courier Yurii first noticed something was happening with the amount of cars driving out of the city.

“Everyone was in a hurry and running away in a panic,” he says. “But the day seemed normal. I rode my bike around the city, visiting the usual places. Then during the night, a friend and I were in Podli and heard the air raid sirens. We didn’t understand what was happening until then.”

Soon after, Yurii returned to the store he rented his bike from but found the owners preparing to leave.

He remembers: “Before they did, they let me keep the bike so I could get around the city.”

For Bogdan Charkovskiy in Lviv in Western Ukraine, February 24th was his brother’s 10th birthday. He said how he had planned to take his little brother to school, but instead he was woken up by his family telling him the war had started.

“I didn’t believe it until I watched it on the news,” says Bogdan, whose disbelief was shared by courier Sergey.

“I watched the speech from our President and I just started packing documents, money, and other essentials so we could leave for one of the shelters,” recalls Sergey. “This was before we realised the nearest one we could go to was too far away. Even now, we’re still in Mykolayiv.”

While we might expect a city under assault to come to a stop, for many in Ukraine, things have continued and routines have been preserved.

For partners, this might have seemed an impossible ask with many restaurants being forced to close. This is exactly what Kitaika owner Anna had to do, fearful of the effect the job losses would bring, but ultimately concerned for her workforce’s wellbeing.

Foodz owner Galina shared this sentiment, however heartbreaking the closure might have been. She explains, “We decided to close the business the same morning the war broke out. The most important thing for us was the safety of our employees.”

Yet one way businesses are continuing to offer support, and maintain some normality during this time, is through Glovo’s CookRooms. Originally conceived to offer kitchen space to businesses looking to expand into new cities, CookRooms provide the means to produce delivery-only orders without the need to open a restaurant.

When the crisis in Ukraine unfolded, Glovo’s CookRooms quickly pivoted to become a significant lifeline to those partners whose restaurants were forced to close, as they provided the infrastructure, kitchen management and couriers needed to keep running. Anna and Galina moved their business operations here, as did Sushi Ushi owner Oleksii.

He explains, “When we were given the chance to reopen the business and to continue operating from a Glovo CookRoom, it was a great opportunity for us, especially financially.”

The CookRooms allow partners like Oleksii, Anna and Galina to not only maintain their businesses and income during unprecedented times, but to also provide food to Ukraine’s residents without needing to leave their homes and unnecessarily expose themselves to danger. 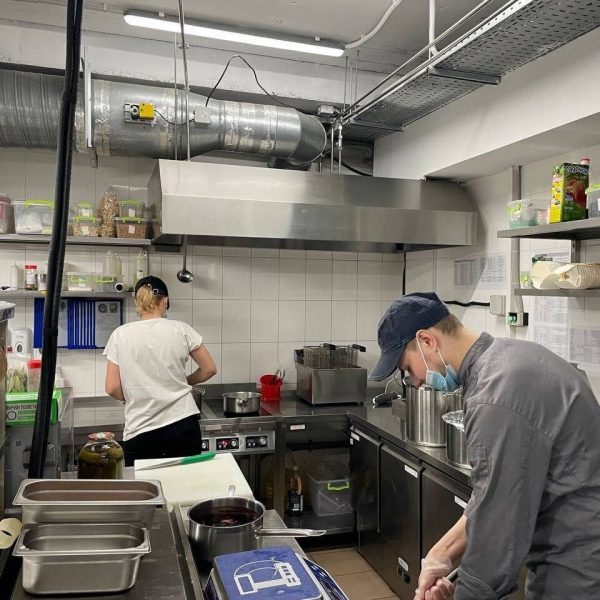 This can make an extraordinary difference during a difficult time. As Oleksii continues, “People write to us confiding that being able to order home delivery takes them back, even for a moment, to a time of peace and tranquillity.”

Normality can be a lifeline during these times and even in Ukraine, it’s there to be found. As courier Sergey says, “Life somehow goes on. The city is alive with people going about their usual business. It helps to distract you from the reality of the war.”

Sergey is right – life goes on. And while it might seem surreal to think of bike couriers flying through the streets of a city under fire, that is exactly what is happening in Ukraine.

That’s because for couriers like Yurii, it’s important to help.

“It’s an important job for the development of society,” he continues, “and now it has become even more meaningful because there are many who need help.”

With people gradually reopening their businesses to earn money and to help those in need, Yurii sees his role as a courier as crucial in connecting the dots.

“I’ve never seen so much gratitude!” he says, recalling one delivery in particular. “These deliveries, these connections – they bring people together. Wherever possible, we should give and show what we are capable of because we are people.”

Serhij from Kyiv is another courier who has seen the “joy, smiles and gratitude” of those receiving his orders.

“People are glad that they don’t have to go out into the city to go in search of what they need,” says Serhij. “They’re surprised when we turn up – shocked that deliveries are still happening! But you see the optimism it brings to their faces – that life continues and may someday return to normal.”

In the city of Kryvyi Rih in central Ukraine, Oleksiy Kalinichenko is someone else who delivers goods to those in need and who can’t take care of themselves.

“I feel we’re helping when we make these deliveries – you can see their happiness; their gratitude,” he says.

On the left, an elderly woman in a shelter and, on the right, a car full of food on its way to a humanitarian centre.

Talking about one of the partners he works with, Oleksiy says how “they’ve set up a volunteer station that helps refugees from all over the country. Now, when people want to help by donating clothes, but can’t bring them in person, I help deliver them.”

Other partners throughout Ukraine have seen their businesses forced to close and leave hundreds of staff out of work. But this has made them only more determined to carry on and find new ways to help.

For Sushi Ushi owner, Oleksii, who closed his doors earlier this year, he now operates out of a Glovo CookRoom – a custom-made kitchen once offered to Glovo’s partners to help transition into new locations, but now crucial for a business to maintain services in lieu of a restaurant.

Oleksii explains, “The client has changed, and so has the menu. But we’ll keep working for everyone who needs it.”

For Galina, owner of Foodz, the most important thing now is to feel useful.

“Right now, we are dedicated to helping local residents,” she explains. “Even though there are big supply problems, one of the most comforting things is to be able to bring desserts and provide some joy in the middle of this situation.”

She continues: “I think a lot about my relatives who live in the areas occupied by Russian forces. This is why we have to carry on.”

“You can still find happiness”

When the war started, many plans came to a stop. Bogdan’s little brother was unable to celebrate his tenth birthday like any other 10-year-old.

While for Sergey, he never got to buy the car he was planning to; the one he wanted to drive to The Netherlands in with his young family.

For Yurii, he was unable to invite his childhood friend to his home city and introduce her to her friends.

For Anna her plans to expand her business across Kyiv were put on hold.

But while the plans of couriers and business owners across the country, like everyone across Ukraine, have changed – there remains hope that one day they will still be possible. And that normality will return.

For now though, it is about the hope that, as President Zelensky put it, “life will conquer death, and light will conquer darkness.”

It might be hard to believe at times, but for courier Serhij Siedykh, who delivers his orders on foot and takes in the city around him, survival is about finding happiness in the simple moments.

“The war has engulfed every little thing,” he says, “but you can still find happiness.”

ConsumerSocial Impact
Behind the Counter | Ep.3